Umlaut has a lot of crap in boxes... like this from late in 1983. It's part of an unpublished Slayer interview that I did with Kerry King and Jeff Hanneman for my old fanzine Whiplash. It was done before their first album Show No Mercy was released; Brian Slagel had sent me an advance tape of the album and I loved it. I was 19 years old. 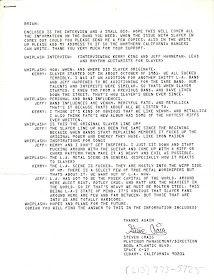 Trivia: The interview was done at least 2 or 3 months before Slayer had even played in The Bay Area for the first time.

For such a short piece it's chock full of fun facts that will upset the revisionist history view of the Old Metal Days for a lot of people. Such as:


"Band influences are Venom, Mercyful Fate, and Metallica.That's it because that's about all we listen to."- Jeff Hanneman - 1983